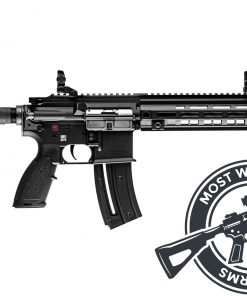 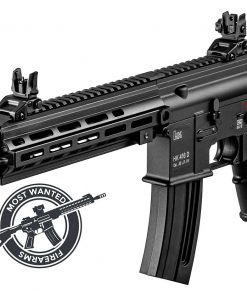 Hk416 rifle For Sale. Get the look and feel of the legendary rifle used by the world’s most elite fighting forces in a semi-automatic .22 LR rifle. HK partnered with Umarex of Germany to bring you the best, most realistic HK branded rimfire rifles available. Whether you use it as sub-caliber trainer, for hunting or competition, make sure you get the only HK416 .22 LR rifle authorized by HK.

The HK416 (5.56 mm) was developed by Heckler & Koch for US special operations forces as a major product improvement of M4/M16-type carbines and rifles. Using the HK-proprietary gas piston system, the HK416 does not introduce propellant gases and carbon fouling back into the weapon’s interior, making it the most reliable of any M4/M16 type weapon.

An improved and tool-less gas regulator for suppressor use, a redesigned, user-friendly lower receiver, which allows complete ambidextrous operation of the weapon and ensures optimized magazine compatibility, as well as numerous technical improvements to maximize the operator safety, reliability, ammunition compatibility and durability under real operating conditions.